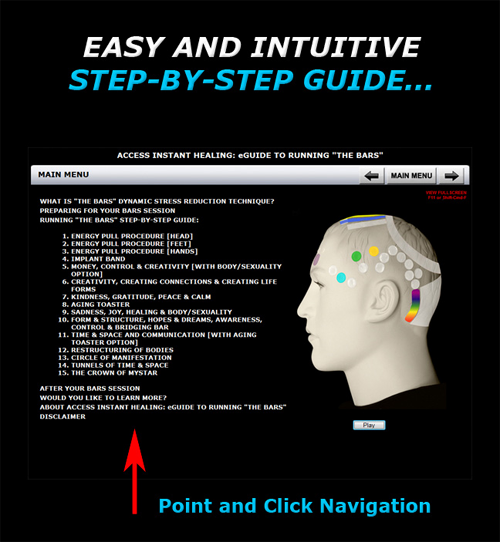 The Access eGuide to Running The Bars. This is a learning tool only and does not replace attending a live Bars class.

Note:  You will receive an email with digital download instructions immediately upon purchase.

This is a learning tool only and does not replace attending a live Bars class.

Product Description:
The eGuide to Running the Bars is an incredible tool to introduce the Bars technique to others seeking change through greater consciousness.  Not only can it be used in the comfort of your own home, but it can be a dynamic visual presentation tool for Bars facilitators and practitioners. It can be a great demonstration piece at expos and conferences or a wonderful introductory display at wellness centers, health spas and professional service offices.  May the phenomenal Access Bars technique be a life-changing gift to you.

Features:
This easy and intuitive eGuide is designed to enable anyone to learn to give and receive a Bars session.  The eGuide will not only help you prepare for your Bars session, but will take you step-by-step through one possible 15-step Bar session sequence.  With just a few clicks of the mouse the user can navigate to any step in the Bars session and access a variety of descriptive images, text and audio* content explaining the process in a clear and simple manner.

System Requirements:
The eGuide is an HTML-based application fully compatible with the following web browsers: Safari, Firefox, Internet Explorer and Google Chrome. Recommended for devices with a minimum screen resolution of 1024x750 pixels for optimal performance.  Although not specifically designed for mobile devices, the eGuide does work on certain larger display mobile devices running the web browsers listed above.  Note: For iPad, iPhone and Android mobile device users the audio feature is currently not available.

Jolanta Swietorzecka CFMW, was born in Soviet occupied Poland and immigrated to the United States in 1991. Her interest in the science of the holistic arts, cosmetology and work as an esthetician has prompted her to seek new ways of healing bodies and caring for herself. In 2002, she was introduced to Access Consciousness® and her life changed. She became happier, healthier, more peaceful, more creative and younger looking. Studying with the founder of Access Consciousness, Gary M. Douglas, and seeing firsthand the phenomenal results of self-healing, has inspired her to become an Access facilitator and assist others to heal and transform.

In 2006, Jolanta met Dr. Harold Bafitiis, a local plastic surgeon, and introduced him to the phenomenal tools of Access. Suddenly the idea of bringing healing energy into the operating room entered her awareness, so she asked Dr. Bafitis if that would be possible. Dr. Bafitis agreed and Jolanta performed her very first healing energy session on a patient while they were being operated on. The results exceed their greatest expectations and just like that Access Instant Healing was born. Since then Jolanta has appeared on South Florida's Channel 5 TV News and her work has been endorsed by Columbia Hospital in West Palm Beach.